(16)
"Aavni, where are you? How to find you?"
Tej,driving his favorite Verna listening to his favorite song. Early morning drive. Cool weather and calm atmosphere. National highway had minimal traffic at this time. But destiny has its own plan. Tej was in first lane. And suddenly he noticed a car from opposite side coming towards him. Before he could react... Bang...
In few minutes Ambulance came and took care of all the person who were injured in accident. Police came and took situation under control. Called the relatives of the injured person from the details they got from a diary from car.
Looking at that speeding car coming in his direction, his best efforts was to have minimal injury. He couldn't escape from that he knew..He took a sharp turn to left allowing that car to damage right side of car. He closes his eyes remembering a sweet and caring voice. A face came to his sight. A charming smile and brown eyes. Wasn't this face too beautiful. The voice had so soothing effect. His lifeline. His love. His Aavni.
He smiled. Thinking about those seven years. Where's his girl. Is she okay. There were so many questions in his mind. The first message in battlefield game that he got from a player named Aimsy and the way she introduced herself. Those caring moments when just by her morning message his day became so energetic.
Her calls were the booster dose in his gym routine and her good night texts were the sweetest dessert one could have. He clearly had an idea that his voice was the drug for his girl. So it was his favourite thing to send her favourite songs in his voice. The cute little butterfly in his life that came so dramatically and vanished in thin air.
Why did she stopped texting and calling. Why did she moved from her hometown. Why he didn't realise that he had no backup contact details to contact her. Wasn't she smart enough to ask Ayan about his health when he switched off his cell. Wasn't she smart enough that she started a reserved but good contact with two of his friends as it was his habit to block her.. There were so many Ws And no answers.
How amazing was the day when he confessed. It was monsoon night. They were chatting as usual. It had been a year of their friendship. So she was so comfortable in sharing all stupid stuff about her day. She felt so shy in sharing her poems that she wrote for him. She sent him a beautiful message. And he called her. Talking about how their day and routine.
On call:
Teja : Aavni, what is the biggest wish of yours.
Aavni : I want to publish my Anthology. What about you? What is your biggest wish??
Teja : My biggest wish is..... That book should be published under name : Aavni Tej Pandey... Aavni, I don't know how you feel about me, but I love You So Much.... Will you be my betterhalf?"
Aavni was speechless. She couldn't decide words to respond....
Tej could sense that Aavni was confused. But he didn't had idea that she was nodding her face on other side of call with tears in her eyes...
Aavni : I love you too Tej.. But...
And this "but" spoiled everything. Without waiting for her to finish what she wanted to say he cut the call. Blocking her contact number.
Their last conversation. How could he not wait for her to speak her heart. How could he switched off his phone.... He switched on his phone after two days of the incident. Tried to call Avani, Listening to recorded message saying the number he had dialed was either switched off or out of coverage.
From that day she never messaged him. He never asked her why? She never disturbed him. And just like this a beautiful proposal became the worst nightmare of their love story.... His anger his impatient nature.. All was his fault. With These thoughts in his subconscious mind....
His heartbeat was increasing rapidly. Blood pressure high. Doctor gave appropriate treatment immidiety. May be the head injury was the reason of those symptoms. They gave analgesic injections in IV fluid and other necessary steps.
Tej was badly injured. When he got consciousness he was in hospital. His hand was fractured and there were stitches on his forehead. He look around him Ayan was in room reading something. He felt relieved that Ayan was there. But he had no idea that it had been two days since the accident happened..
A nurse came and removed the bandage from his head. Clean the wound. Checked the stitches. He was okay now. Nurse informed that he was totally under ICU care for 24 hrs and then subjected to this room. He was under sedatives and IV fluids. But since he is okay now doctor will decide the rest. She left the room.
At evening.
He was sleeping when he heard the soothing voice in his room. He thought it might be a dream. But he felt soft touch on his hand and came to sense. A lady in room. He looked around but Ayan was not there. He looked at the person wearing mask. Removed the mask to reveal a beautiful face with brown eyes. 7 years and the girl in front of him was none other than Aavni, his lifeline.
Download Our App 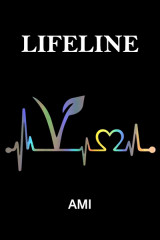