Tinku, a little pup at Mangu’s farm is not sleepy at all. He decides to step out into the night and meets many interesting animals. It was a bright moonlit night. All the animals in Mangu\'s farm were sleeping. Only Tinku was awake! “I am not sleepy, Mommy,” murmured Tinku. But his mother did not hear him. She was fast asleep. He turned left, and he turned right. He lay on his tummy, and rolled on his back. Tinku turned this way and that, but he just could not sleep, so he set off into the night to see whom he could find. Up in the sky, Tinku saw the moon, white and round, smiling down at him. He felt very happy. ‘The night is beautiful,’ thought Tinku. Far away, on the top of a tree, there were some tiny, glowing lights. “How are those lights up there?” One spot of light flew down! “I’m a firefly,” said the spot of light. “I glow in the dark!” “Will you be my friend?” asked Tinku. “Yes, I will!” said the firefly. Then something flew by and hung upside down on a tree. “What is your name, bird?” asked Tinku. “I am not a bird, I am a bat. I can see in the dark!” said the bat. “Will you be my friend?” asked Tinku. “Sure!” said the bat. Behind them, a few leaves moved in the bushes. Someone was hiding! “Who are you?” asked Tinku. “I am a fox,” said the animal. “I stroll at night.” “Will you be my friend?” asked Tinku. “Definitely!” said the fox. Then, two shiny eyes looked at him from a tree. “Who are you?” asked Tinku. “I’m an owl,” said the animal. “I hunt for food during the night.” “Will you be my friend?” asked Tinku. “Yes, I will!” said the owl. Suddenly, Tinku heard, “CHIRRRRRP! CHIRRRRRP!” “Who is here?” Tinku asked. Then he looked in all four directions. “I’m a cricket,” said the insect. “I chirp when it is dark.” “Will you be my friend?” asked Tinku. “Okay!” said the cricket. Tinku and his friends jumped and tossed and rolled until Tinku yawned. “I am sleepy. I have to go home now,” said Tinku. He was happy that he had so many new friends. Snuggling close to his mother, he said, “The night is not a lonely place, mommy. The Night is full of wonderful friends.” “Yes!” replied his mother. “Your new friends are nocturnal, just like us wild dogs.” “Nocturnal animals eat, play and work at night. They rest during the day. You must sleep now. Sleep will give you energy to play with your day-time friends tomorrow. Good night, little one!” she said, hugging him tight. The bright round moon shone all night long, spreading her calm light all around, and Tinku slept all through the rest of the night! Illustrations: Kallol Majumder Music: Rajesh Gilbert Animation: BookBox 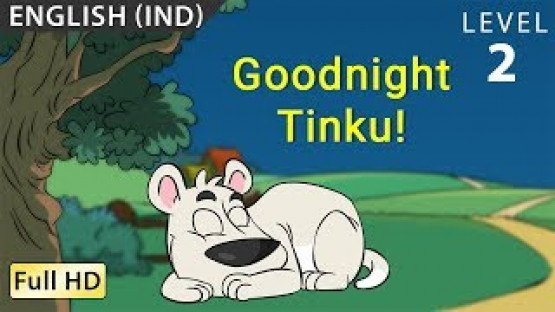