"I'm a Rape Survivor…and Nishi is a Rape Child….” these words hounded Ajit like a mad man, hammering his consciousness every second. He was on an autopilot mode, not having any awareness of when he left her apartment, when he started his car, and how he was half-way to his office.

The success party was over now and what remained were just few traces of it, paper cups lying on the ground, paper plates piled on few tables, few deflated balloons scattered, mostly in pieces and few balloons just floating here and there. Ajit went into his cabin, threw his phone and car keys on the desk and just dug himself in his chair. Suddenly, every word said by Saroj filled the surrounding.

He now knew that how those guys drove around the city for an hour and after satisfying their monstrous instincts had dropped off her home like gentlemen. He now knew, that how that whole night, she wailed and cried in the arms of her mother, feeling insulted and humiliated, how she kept bathing herself every five minutes as if by trying to remove the stains of blood and sperms, she would be able to erase that time from her life.

He now knew that the next day when he came to meet her, how she had refused to meet him and cooked a story of her getting married and having shifted to Delhi. He now knew, that when Ajit stood outside her door, shocked and with teary eyed, she looked at him from her room’s window, with longing. He now knew, how much she wanted to hug him, cry on his shoulder, feel safe and secure in his arms again, but all did, was just stare at him and watch him go.

He now knew, that the family doctor had informed them that there were high chances of her being pregnant and also offered to go away from this city where everything would be taken care of. He now knew that within a week, the whole family had shifted to Mandi, a small hill station at Himachal Pradesh, where they had their own farmhouse. He now knew that after three weeks, she was declared pregnant and how they had planned a medical abortion at her home.

He now knew that on the day of the abortion, when the doctor had come to her bedroom with a nurse, she confided in him about keeping the baby. He now knew that how bravely Saroj fought that day with her parents whose worst nightmares were coming true, one after the other. He now knew, how after days of struggle and a resolute of living on her own, had her parents relented to her demand, but on their condition.

He now knew, that her parents had cooked up the story of her non-existent husband, and how he was killed in a car accident leaving behind his pregnant wife, because of which they had shifted from a big city to a small hill station. He now knew, that how time had passed, day in and day out for the last ten years, wherein Saroj gave birth to a beautiful baby girl, nurtured her and gave her all the love she had, keeping that horrible pain to herself of the circumstance under which she was conceived.

He knew all this now except for one thing, the thing which mattered to him the most. So, he decided to find that out the next morning.

It was eight in the morning and Ajit is driving towards Saroj’s place. Last night, he got answers to all of his questions except for one. He wanted the answer and he was going to her place to get it.

On the other hand, at Saroj’s place, things were as usual. Nishi was running all over the living room, trying to get rid off the medicine which Saroj had held in her hand and was also following Nishi. Yesterday evening, the care taker had called her in the office saying that Nishi had temperature and was asking for her, because of which Saroj had to leave work early. And now, having taken an off from work, Saroj was busy tending to Nishi.

Saroj said, “Come on beta…please have it..!! See, your fever will go in an instant…”
Nishi, “No maamma…..It is bitter….yukkiieee……Nooooooooo”

Just when this cat and mouse chase was on, the door bell rang. Nishi ran and straight went to the door. She opened the door and saw Ajit standing hiding his face behind a huge flower bouquet. Nishi gasped and screamed...“Mammaa….so many flowers….mamma….look..look…”

By now, Saroj had reached the door and was standing stunned, not expecting any of this. The bouquet lowered and she saw Ajit, standing tall, having a warm and loving smile on his face. She asked him to come in. He didn’t budge, rather said, “All my questions were answered except for one.”

Saroj looked at him confused. Ajit continued, “Saroj, will you marry me?”

Saroj stunned, just moved few steps back. Her eyes were welled up with tears, her mouth made gentle movement as if trying to say something but her words failed her. Till till time, Nishi who was playing with the flowers was now looking at both of them intently.

After a few seconds of silence which felt like centuries for Ajit, Saroj finally said, “I love my daughter, no matter what. She is MY DAUGHTER. MY FLESH AND BLOOD. She deserves all the happiness of the world and a safe and secure upbringing. I can’t and won’t do anything which would compromise this.”

She expected Ajit to back off having once said this, but he just stood there, looking at her with all the love in his eyes. She finally said what she really wanted to say: “I am scared Ajit. I ‘m scared that this relationship is based not on love but on pity. Pity for what happened to me, pity for my life, pity for me being a single mother…and I DON’T WANT PITY AJIT…..I DON’T.”

Ajit closed the main door behind him, held Nishi’s index finger who was now standing beside him and walked towards Saroj. He bent down on his knees and looked at Nishi, holding both her hands now. He gently asked her, “Nishi beta, do you like your mamma?”

Ajit listened to this with great interest, then pulled her tiny right arm close to his face and placed a small peck on it. Just then, Nishi ran towards her mama, giggling and smiling. As if remembering something, Nishi halted, called out, “Mamma..cartoon…!!”and went straight into the bedroom.

He got up, turned towards Saroj and said, “Saroj tell me, how on Earth, can anyone pity you or your daughter or your life?? Just look at yourself, look around you, look at Nishi..you brought all this up, ALL BY YOURSELF! Just look at yourself and what you have achieved at Creative Wings. Everyone adores you and respects you for your work. This house breathes, laughs and lives just like the two people who reside in it…

Saroj, what happened to you ten years ago was maybe your fate, but what you have been doing all these years, everyday HAS BEEN YOUR CHOICE!! YOU CHOOSE THE HARD WAY, YOU CHOOSE TO LIVE…NOT JUST LIVE…THRIVE..ON YOUR OWN TERMS!! Saroj, if anything, I RESPECT YOU TREMENDOUSLY! I RESPECT YOU FOR YOUR STRENGTH, FOR YOUR COURAGE, FOR YOUR ZEAL TO LIVE, FOR YOUR MOTHERHOOD, FOR WHO YOU ARE!!!

By marrying you, I don’t want to create another world with you. You have already done that. I just want to be a part of this beautiful world which you have created. I don’t want to take you anywhere, rather I want to be in, for I know loving you and being Nishi’s father would make my life worth living.
So please Saroj, let me have this honor, take me in this beautiful world of yours, for I have always craved and dreamt of such a family, such a world to live in. And we both know that for me, IT HAS ALWAYS BEEN YOU SAROJ…ALWAYS BEEN YOU..!!”

With every word Ajit’s spoke, it seemed as if he felt lighter and lighter. A sudden force of tears started streaming from his eyes. Saroj had an idea since college, how much he wanted and needed love and family which he could call his own. But today for the first time, Saroj felt the intensity of it. She could see the broken child in him.

Saroj went towards Ajit who was still standing and looking straight into her eyes with his foggy vision. She went closer and moved her fingers towards his face. As she started wiping his cheeks, their eyes met. Just then, Ajit cupped her face in his palms and said, “You are mine now Saroj…You both are mine now…” 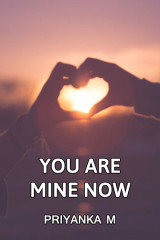