(2)
With the break of dawn ,Shubhuni felt better and her mother got her ready for the big lunch .
Shubhuni's mother handed her's wedding saree and said "dress as best as you can " and she left the room . As the clock needle stuck one , two black Land Rover's driven by chauffeur drove in their driveway . Shubhuni's parents rushed out to greet Barrister sahib and his family .The whole locality stared the scene as Mr.Das stepped out of the car .
Barrister sahib along with his parents and two sons had come to see Shubhuni. Barrister sahib's maa an elegant lady greeted Shubhuni's mom and said "Sorry ,we bought the boys as they were excited to see their new maa." Shubhuni's maa got thrilled on hearing that the lady had already decided and come that she would make her daughter her son's wife .
Barrister Sahib a six feet tall slim built man , with a few greys shining on his head was a gentleman. His two son's the elder one Suhas and Vikas the younger one touched Shubhuni parents feet .Barrister Sahib's maa said "both my grandchildren are well mannered . They study in boarding school in Shimla and when your daughter comes to our house ,they will study in a convent school of the city .
Mr ,Das father was himself a well known retired judge spoke less .He a man of few words said holding a glass of whiskey "Cheers to life ,when your wife is the commander of your house" hearing this all laughed and the kids exclaimed in happines " Chhoti Maa ,has come ."
Dressed in banarasi saree and her hair tied in a bun she seemed to be an Apsara had stepped on earth from heaven .Shubhuni's father said "My daughter Shubhuni "and he introduced her with the family .
As her father introduced her to all , Shubhuni's head swirled and when the turn of Barrister came Shubhuni fainted on floor . The kids shouted "Maa. "
All of them stood from the dining table and got hold of Shubhuni lean body and took her to the room . The chauffeur was handed a letter by Barrister sahib and was asked to drive fast.
Soon the best doctor of the city came to examine Shubhuni and he said that due to mental stress or excitement Shubhuni has fainted . She would be fine.
He greeted the Das family and left .
Before leaving Barrister Sahib's Maa declared that
they would bring barat on next Sunday and take Shubhuni with them .
Shubhuni's parents got anxious that how they would prepare so much in such a short notice at this the judge sahib said "leave everything to us ,you just get our daughter ready on next Sunday."
As they left ,Shubhuni woke up and called out to her Maa . She stammered and said " Maa ,please come I want to talk to you ."
Her parents rushed to her ,with a smile on their face and said "Thank god you are fine . The city's best doctor came to examine you . Shubhuni you are so lucky and they are coming next Sunday with baraat
to take you .You are blessed ."
In their excitement they didn't gave a chance to Shubhuni to speak her mind and the word "Maa " kept on echoing in Shubhuni ears .
Download Our App 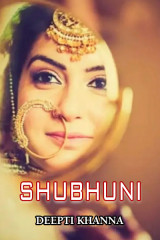