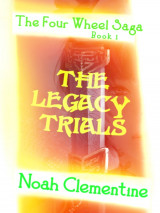 The Picard sailed leisurely in the waters of the Reisui. It was a single-masted ship that could support up to thirty sailors. To reach the Karasuma village mainland, one has to take a vessel from the last port in ...Read MoreBay of Daiwan. Two days in the sea, along the coast, brings one to the semai canyon, which wedges its way through the lofty Youjin mountains. The canyon is a murky mile-long pass, which further opens into the downstream waters of the Reisui river- overlooking the river valley. The origin of the river is at the base of chojo hill- the territory of Karasuma village.

The Four Wheel Saga Book - 1 - THE LEGACY TRIALS
In the continent of Kinenhi, ravaged by past conflict and war, an age of peace and harmony has endured for years. Trade and commerce are flourishing among the six village nations. In the warrior village- Karasuma, the Legacy Trials ...Read Moreabout to begin, which tests the mettle of the young and uninitiated. A host of budding warriors train to contend against each other in battles of melee, magic, and the mind.
The Four Wheel Saga Book - 2 - Prelude: The Dragon's Day Out
A minute passed in silence, and then there was the rustling of leaves and breaking of twigs. A tall, well-built figure emerged from the wilderness. He wore dark baggy warrior breeches and a sleeveless, black armor vest; a leather ...Read Morecovered half of his face. Youthful hair fell to his shoulders.Yorokobi: "Who are you? Identify yourself!"Stranger (loudly): "I feel no warrant to be known to weak men- who are about to die."Yorokobi: "You sound pretty pompous for a bandit and smuggler. Tell me, what artifact did you make use of, to teleport? The Overlord has banned black market items in
The Four Wheel Saga Book - 3 - Crows Come to Roost 1
The boy had been walking for hours. He was lost in a wide, elaborate corridor, without a ceiling, doors, or windows, with walls that scaled the sky. The starlight illuminated his path, which seemed to go on endlessly. He ...Read Morebronze statues, tiled fountains, and ashen murals. On and on he went, yet there was no end to the reverie. Drained and parched, he tarried by a fountain to drink some water. As he slurped the cool liquid, something fell out from the water spout into his hand. The boy held it up curiously against the starlight. It was a
The Four Wheel Saga Book - 4 - Crows Come to Roost 2
The Mikashita palace entrance, like other kin-lord estates, faced towards the Shibai Sharin temple. A fenced garden, flush with buttercups, anemones, and honeysuckles, surrounded the palace. The estate elongated into fruit orchards to the north, while on the south-end ...Read Morethe training ground- an egg-shaped field surrounded by a stone pavilion. This day, it was brimming with seventy-seven out of ninety-five members of the household. The absentees were out for essential work. The household staff, including Chief Gotou, were fifteen. The kin-members gathered in an arc of the pavilion, while Overlord Senju stood on the grounds facing them. Mitsu joined
The Four Wheel Saga Book - 5 - Crows Come to Roost 3
A bunch of Kento's cousins stepped out of the crowd. They were twelve. Akako and Shigeo had also joined the bunch. Apparently, being called a 'little lady' had irked Akako. Kento did not leave his seat, turning a cold ...Read Moreto the elbow nudges of the kids. Yuuki moved a hundred feet away from the pavilion and marked a black burnt circle on the ground with flaming kitsu. It was about seven feet in diameter.Yuuki (loudly): "The aim is to either make me step out of this circle or land a direct hit on me- physically or with kitsu. You can