The country hadn’t experienced such terrible storm for years. Buffalo was not the only one that had been hit and pierced by its thorny volley of arrows. The hurricane had created havoc in many other parts of the country. Even the Niagra Falls had experienced the chill in that shivering night and stood frozen. The reckless insanity of the snow storm had caused devastation in many places besides taking toll of human lives. People saw callous pictures of broken homes in newspapers. Many parts were drowned in darkness.

The storm had also perturbed and alarmed Myanmar that was thousands of miles away. The shocking news astound the people when they came to know that the distinguished saint (monk), whose years old Ashram was held in such high esteem that it was almost worshipped had fallen a victim to this outrageous storm. The Ashram campus located in that mountainous terrain had been blown to bits. No trace of the Baba, who was above hundred and a resident of the Ashram was found anywhere among the ruins and strewn things. God knows where he had disappeared. India and Myanmar, along with America arranged all sorts of help for the victims during the rescue operation. Most of the ongoing conversation for quite some times was concerning speculations whether the saint (monk) and the very aged Baba were alive or had perished. The immeasurable wealth of the Ashram was devastated and through embassy the government took its custody.

The land that been foretelling people’s future was now absolutely helpless and vulnerable where its security was concerned.

The persons whose tears provided safe shore to the sinking coasts washed by torrential downpour included Emra from Norway, Agatha from Virginia, Sanjha from Azarbejon and the Prince of Denmark.

Those who could not save themselves were an easy prey and those who survived miraculously couldn’t save anything. The sea waves rose so high that nest morning the angry fish did not want to look at the run and hid themselves in deep waters.

It looked as if God controlling the steering wheel of the world dozed off and the world van lost control and sprang against some deep cavity. But just as during a calamity in the jungle the grazing flock tries to save its shepherd, in the same way the devotees of God stepped out to help him. And ultimately the night passed and it was dawn.

Kinjan and Perina kept on touching the pages of newspaper and regretted the incident. They went down the memory lane and remembered the honeymoon night they had spent years back.

But soon they had to come out of their trance, their memories of that intoxicating night because their young daughter had returned from college and stood in front of them. How could she know which musical notes, the news of the storm had struck in her parents mind’s eye and at which cross-road? Voices were singing to the accompaniment of those musical notes in their hearts, but how would Della know all this.

The newspaper also reported that many celebrations had been cancelled due to that disastrous storm. Kinjan and Perina also dismissed from their mind’s eye the bloom that had blossomed in their hearts.

When Della got a job offer from a Company in Nigria, Perina was hesitant but when she came to know that she would be working in New Jersey only. She was relived. And hardly three months had passed when Della gave her parents another pleasant surprise. She got married to her colleague Wooden Rose and brought him with her. For Kinjan and Perina, it was a memorable day. On the cover page of their life an inscription was written in golden letters. Writing incidents with the pen of time! Well this is life.

Yet another drop of honey was added to Kinjan and Perina’s already full cup of joy when Della gave birth to twins, two little baby girls. How time flies; they realized it only when one fine day Della and wooden left for Nigeria with their little girls.

Whenever Kinjan got some free time during his busy schedule, he and Perina planned a trip to Nigeria, but somehow it was never materialized, leisure was short and brisk business hardly gave them breathing space. Although they could not go to meet their children, the children came once or twice and spent some time with them.

The chain of this making plans and its fizzling out was broken when Della came one fine day and left her kinds in the care of Perina and Kinjan. Della and Wooden had to go to places in their business trips hence they decided to leave the children with their grandparents. After a few days both of them shifted to China and Della made her parents promise that they would visit them there and stay in China for some time.

One day, there was a miraculous incident. Della had come to meet her parents and children. She opened her suitcase, took out an old diary and presented it to Perina like a precious gift. Perina took the diary and looked at her daughter curiously. When Della explained the mystery of the diary she almost jumped with excitement and dropped the packets of clothes Della had brought as gifts of for her parents and daughters.

She clutched the diary close to her heart and ran to some secluded place just as a newlywed, staying in her parents house runs when she receives her husband’s first letter. She wants everyone to know that she has got a letter from her husband but does not want any peeping toms around.

Della told her that in China she had gone to a small town in connection with her work. There she came across a queer weird sale. An old man sat with two or three people in an old house with items that looked almost ancient. They had collected some old objects from some museum and were selling them. The articles on sale included the photographs of an Ashram and its owner saint. They said the Ashram was famous all over the world and the thing they were selling belonged to that Ashram. Della combed through those items and saw this diary. It was an ordinary item but when she opened the first page she was surprised to see what was written on it. In a beautiful handwriting someone had written “to dear Perina and her husband Kinjan who managed to spare some moments during their honey-moon trips and came to visit the Ashram…” Emra.

After reading this, Della decided to buy the diary, why shouldn’t she; she purchased it like an expensive gift and kept it reverently like sacred Quran, Bible or Ramayan. This indispensable item was a diary, related to her parents honeymoon trip and was addressed to them hence she kept it with her without reading a single word.

Perina started reading it and was so engrossed that the world ceased to exile for her.

Emra had written that she waited for Kinjan and Perina for years. She was absolutely sure that they would visit the Ashram one day. The saint (monk) had also be sought Kinjan to come again and promised to answer the question he had asked on his fourth visit. Hence she kept on waiting for them but when a long time elapsed and they did not come, she was rather worried lest some misfortune might have fallen on them.

Emra had written of the later she broke all the rules and regulation of the Ashram just for Perina’s sake and met the Baba. She also disclosed what perance she had to pay for meeting the Baba who was always unclothed and meeting him was strictly prohibited.

Emra had asked him just two questions. First, why and how did he take out the dead fish from Kinjan’s pocket and second, why did he shout “Panna; Panna;” when he saw Kinjan.

The Baba agreed to answer both her question. Emra was delighted and was sure she would be able to help her quests with the information she got. When they did not come for months she was rather disappointed. Then she had a brain wave. Why not put the whole information in writing so that even if a long time elapses the information would be safe and if ever she comes across their address, it could be conveyed to them. On the last page of the dairy she had revealed why she was doing all this. Why had she developed this attachment for Perina or Kinjan?

Emra further wrote that the Baba placed a queer and rather uncanny condition before her for answering her questions. He said she was to flog him with a leather whip with all her strength. She was to whip him till the whole of his body was covered with blood. He made it very clear that if she failed to do it she would not get the right answers. He declined her offer of taking some Ashram employee’s help to whip him.

With no other option left, Emra had to give in and agree to the Baba’s conditions. Tears flowed down her cheeks as she went on hitting the fragile worn off frame of that more than hundred year old learned saint so brutally.

Soon stream of blood stated tricking from that old frame. Emra’s heart constantly warned her last she should commit a murder. She had been in the Ashram for years and had heard about the miraculous acts he had performed so she had to do whatever the Baba asked her to do.

And above all she wanted answers to the questions concerning Perina and Kinjan that had been puzzling her, and it was only possible if she agreed to this conditions the Baba placed before her.

The Baba opened his mouth but suddenly something unexpected happened.

Emra was astonished to sea that as soon as the Baba sat down to answers her questions his face gleamed with a supernatural radiance. His body had no sear nor any trace of blood. Emra heaved a sigh of relief and started listening attentively.

The Baba said,”A soul wandering in air around had taken Kinjan into its grip for the last few days. It was in the form of a small fish and had settled itself in the radiant circle surrounding him; in fact it was making all efforts to remain close to him.”

Emra’s face was devoid of all emotions as she looked at the Baba’s face. Then with a great effort she asked, “Could that soul harm someone? Actually, what was it? Does it enter a perion’s body like some viral infection? Is it related to some materialistic incident, or to be more accurate, accident? Was it an attempt to take a rebirth? Can anyone make an attempt in such a way?

Baba laughed loudly and said, “this life is no short, no need to know all these things. When life starts for someone he does not know what he or she was in the past. Neither one knows what is in store for him or her in future. But… just as while pouring water from one pot into another a few drops spill and fall on the ground, in the same way some lives fall asunder during the process of existence and non existence from the hands of the controller and disappear; like a fidgeting fish that springs out of a pot…” 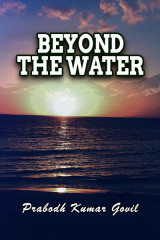