A TALE OF TWO CITIES

A STORY OF THE FRENCH REVOLUTION

It was the Dover road that lay, on a Friday night late in November,

before the first of the persons with whom this history has business.

The Dover road lay, as to him, beyond the Dover mail, as it lumbered up

Shooter's Hill. He walked up hill in the mire by the side of the mail,

as the rest of the passengers did; not because they had the least relish

for walking exercise, under the circumstances, but because the hill,

and the harness, and the mud, and the mail, were all so heavy, that the

horses had three times already come to a stop, besides once drawing the

coach across the road, with the mutinous intent of taking it back

to Blackheath. Reins and whip and coachman and guard, however, in

combination, had read that article of war which forbade a purpose

otherwise strongly in favour of the argument, that some brute animals

are endued with Reason; and the team had capitulated and returned to

With drooping heads and tremulous tails, they mashed their way through

the thick mud, floundering and stumbling between whiles, as if they were

falling to pieces at the larger joints. As often as the driver rested

them and brought them to a stand, with a wary “Wo-ho! so-ho-then!” the

unusually emphatic horse, denying that the coach could be got up the

hill. Whenever the leader made this rattle, the passenger started, as a

There was a steaming mist in all the hollows, and it had roamed in its

forlornness up the hill, like an evil spirit, seeking rest and finding

none. A clammy and intensely cold mist, it made its slow way through the

air in ripples that visibly followed and overspread one another, as the

waves of an unwholesome sea might do. It was dense enough to shut out

everything from the light of the coach-lamps but these its own workings,

and a few yards of road; and the reek of the labouring horses steamed

into it, as if they had made it all.

Two other passengers, besides the one, were plodding up the hill by the

side of the mail. All three were wrapped to the cheekbones and over the

ears, and wore jack-boots. Not one of the three could have said, from

anything he saw, what either of the other two was like; and each was

hidden under almost as many wrappers from the eyes of the mind, as from

the eyes of the body, of his two companions. In those days, travellers

were very shy of being confidential on a short notice, for anybody on

the road might be a robber or in league with robbers. As to the latter,

when every posting-house and ale-house could produce somebody in

“the Captain's” pay, ranging from the landlord to the lowest stable

non-descript, it was the likeliest thing upon the cards. So the guard

of the Dover mail thought to himself, that Friday night in November, one

thousand seven hundred and seventy-five, lumbering up Shooter's Hill, as

he stood on his own particular perch behind the mail, beating his feet,

and keeping an eye and a hand on the arm-chest before him, where a

loaded blunderbuss lay at the top of six or eight loaded horse-pistols,

deposited on a substratum of cutlass.

all suspected everybody else, and the coachman was sure of nothing but

the horses; as to which cattle he could with a clear conscience have

“Wo-ho!” said the coachman. “So, then! One more pull and you're at the

top and be damned to you, for I have had trouble enough to get you to

“My blood!” ejaculated the vexed coachman, “and not atop of Shooter's

The emphatic horse, cut short by the whip in a most decided negative,

made a decided scramble for it, and the three other horses followed

suit. Once more, the Dover mail struggled on, with the jack-boots of its

passengers squashing along by its side. They had stopped when the coach

stopped, and they kept close company with it. If any one of the three

into the mist and darkness, he would have put himself in a fair way of

getting shot instantly as a highwayman.

The last burst carried the mail to the summit of the hill. The horses

stopped to breathe again, and the guard got down to skid the wheel for

the descent, and open the coach-door to let the passengers in.

“Tst! Joe!” cried the coachman in a warning voice, looking down from his

“_I_ say a horse at a gallop, Tom,” returned the guard, leaving his hold

of the door, and mounting nimbly to his place. “Gentlemen! In the king's

With this hurried adjuration, he cocked his blunderbuss, and stood on

The passenger booked by this history, was on the coach-step, getting in;

the two other passengers were close behind him, and about to follow. He

remained on the step, half in the coach and half out of; they remained

in the road below him. They all looked from the coachman to the guard,

and from the guard to the coachman, and listened. The coachman looked

back and the guard looked back, and even the emphatic leader pricked up

his ears and looked back, without contradicting.

The stillness consequent on the cessation of the rumbling and labouring

of the coach, added to the stillness of the night, made it very quiet

indeed. The panting of the horses communicated a tremulous motion to

the coach, as if it were in a state of agitation. The hearts of the

passengers beat loud enough perhaps to be heard; but at any rate, the

quiet pause was audibly expressive of people out of breath, and holding

the breath, and having the pulses quickened by expectation.

The sound of a horse at a gallop came fast and furiously up the hill.

The pace was suddenly checked, and, with much splashing and floundering,

a man's voice called from the mist, “Is that the Dover mail?”

“Never you mind what it is!” the guard retorted. “What are you?”

Our booked passenger showed in a moment that it was his name. The guard,

the coachman, and the two other passengers eyed him distrustfully.

“Keep where you are,” the guard called to the voice in the mist,

“because, if I should make a mistake, it could never be set right in

your lifetime. Gentleman of the name of Lorry answer straight.”

“What is the matter?” asked the passenger, then, with mildly quavering

(“I don't like Jerry's voice, if it is Jerry,” growled the guard to

himself. “He's hoarser than suits me, is Jerry.”)

“What is the matter?”

“A despatch sent after you from over yonder. T. and Co.”

“I know this messenger, guard,” said Mr. Lorry, getting down into the

passengers, who immediately scrambled into the coach, shut the door, and

pulled up the window. “He may come close; there's nothing wrong.”

“I hope there ain't, but I can't make so 'Nation sure of that,” said the

guard, in gruff soliloquy. “Hallo you!”

“Well! And hallo you!” said Jerry, more hoarsely than before.

“Come on at a footpace! d'ye mind me? And if you've got holsters to that

saddle o' yourn, don't let me see your hand go nigh 'em. For I'm a devil

at a quick mistake, and when I make one it takes the form of Lead. So

The figures of a horse and rider came slowly through the eddying mist,

and came to the side of the mail, where the passenger stood. The rider

stooped, and, casting up his eyes at the guard, handed the passenger

a small folded paper. The rider's horse was blown, and both horse and

rider were covered with mud, from the hoofs of the horse to the hat of

“Guard!” said the passenger, in a tone of quiet business confidence.

The watchful guard, with his right hand at the stock of his raised

blunderbuss, his left at the barrel, and his eye on the horseman,

“There is nothing to apprehend. I belong to Tellson's Bank. You must

know Tellson's Bank in London. I am going to Paris on business. A crown

to drink. I may read this?”

He opened it in the light of the coach-lamp on that side, and

read--first to himself and then aloud: “'Wait at Dover for Mam'selle.'

It's not long, you see, guard. Jerry, say that my answer was, RECALLED

Jerry started in his saddle. “That's a Blazing strange answer, too,”

said he, at his hoarsest.

“Take that message back, and they will know that I received this, as

well as if I wrote. Make the best of your way. Good night.”

With those words the passenger opened the coach-door and got in; not at

all assisted by his fellow-passengers, who had expeditiously secreted

their watches and purses in their boots, and were now making a general

pretence of being asleep. With no more definite purpose than to escape

the hazard of originating any other kind of action.

The coach lumbered on again, with heavier wreaths of mist closing round

it as it began the descent. The guard soon replaced his blunderbuss

in his arm-chest, and, having looked to the rest of its contents, and

having looked to the supplementary pistols that he wore in his belt,

looked to a smaller chest beneath his seat, in which there were a

few smith's tools, a couple of torches, and a tinder-box. For he was

and stormed out, which did occasionally happen, he had only to shut

himself up inside, keep the flint and steel sparks well off the straw,

“Tom!” softly over the coach roof.

“Did you hear the message?”

“That's a coincidence, too,” the guard mused, “for I made the same of it

Jerry, left alone in the mist and darkness, dismounted meanwhile, not

only to ease his spent horse, but to wipe the mud from his face, and

shake the wet out of his hat-brim, which might be capable of

holding about half a gallon. After standing with the bridle over his

heavily-splashed arm, until the wheels of the mail were no longer within

hearing and the night was quite still again, he turned to walk down the

“After that there gallop from Temple Bar, old lady, I won't trust your

fore-legs till I get you on the level,” said this hoarse messenger,

glancing at his mare. “'Recalled to life.' That's a Blazing strange

message. Much of that wouldn't do for you, Jerry! I say, Jerry! You'd

be in a Blazing bad way, if recalling to life was to come into fashion, 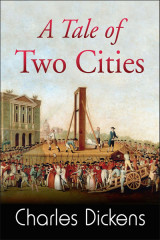