A JOURNEY TO THE CENTRE OF THE EARTH - 25

When at last I came back to a sense of life and being, my face was wet,

but wet, as I soon knew, with tears. How long this state of

insensibility lasted, it is quite impossible for me now to say. I had no

means left to me of taking any account of time. Never since the creation

of the world had such a solitude as mine existed. I was completely

After my fall I lost much blood. I felt myself flooded with the

life-giving liquid. My first sensation was perhaps a natural one. Why

was I not dead? Because I was alive, there was something left to do. I

tried to make up my mind to think no longer. As far as I was able, I

drove away all ideas, and utterly overcome by pain and grief, I crouched

against the granite wall.

I just commenced to feel the fainting coming on again, and the sensation

that this was the last struggle before complete annihilation--when, on a

sudden, a violent uproar reached my ears. It had some resemblance to the

prolonged rumbling voice of thunder, and I clearly distinguished

sonorous voices, lost one after the other, in the distant depths of the

Whence came this noise? Naturally, it was to be supposed from new

Mother Earth! The explosion of some gaseous vapors, or the fall of some

solid, of the granitic or other rock.

Again I listened with deep attention. I was extremely anxious to hear if

this strange and inexplicable sound was likely to be renewed! A whole

quarter of an hour elapsed in painful expectation. Deep and solemn

silence reigned in the tunnel. So still that I could hear the beatings

of my own heart! I waited, waited with a strange kind of hopefulness.

Suddenly my ear, which leaned accidentally against the wall, appeared to

catch, as it were, the faintest echo of a sound. I thought that I heard

vague, incoherent and distant voices. I quivered all over with

"It must be hallucination," I cried. "It cannot be! it is not true!"

But no! By listening more attentively, I really did convince myself that

what I heard was truly the sound of human voices. To make any meaning

out of the sound, however, was beyond my power. I was too weak even to

hear distinctly. Still it was a positive fact that someone was speaking.

Of that I was quite certain.

There was a moment of fear. A dread fell upon my soul that it might be

my own words brought back to me by a distant echo. Perhaps without

knowing it, I might have been crying aloud. I resolutely closed my lips,

and once more placed my ear to the huge granite wall.

Yes, for certain. It was in truth the sound of human voices.

sides of the cavern, until I reached a point where I could hear more

distinctly. But though I could detect the sound, I could only make out

uncertain, strange, and incomprehensible words. They reached my ear as

if they had been spoken in a low tone--murmured, as it were, afar off.

At last, I made out the word forlorad repeated several times in a tone

What could this word mean, and who was speaking it? It must be either my

uncle or the guide Hans! If, therefore, I could hear them, they must

surely be able to hear me.

I then listened with scarcely a breath; I panted for the slightest sound

in the darkness--a cry, a sigh, a question! But silence reigned supreme.

No answer came! In this way some minutes passed. A whole flood of ideas

flashed through my mind. I began to fear that my voice, weakened by

sickness and suffering, could not reach my companions who were in search

"It must be they," I cried; "who else could by any possibility be buried

a hundred miles below the level of the earth?" The mere supposition was

I began, therefore, to listen again with the most breathless attention.

As I moved my ears along the side of the place I was in, I found a

mathematical point as it were, where the voices appeared to attain their

"I begin to understand," I said to myself after some little time devoted

to reflection; "it is not through the solid mass that the sound reaches

my ears. The walls of my cavernous retreat are of solid granite, and the

most fearful explosion would not make uproar enough to penetrate them.

The sound must come along the gallery itself. The place I was in must

possess some peculiar acoustic properties of its own."

distinctly pronounced: cast as it were into space.

It was my uncle, the Professor, who was speaking. He was in conversation

with the guide, and the word which had so often reached my ears,

forlorad, was a Danish expression.

Then I understood it all. In order to make myself heard, I too must

speak as it were along the side of the gallery, which would carry the

But there was no time to lose. If my companions were only to remove a

few feet from where they stood, the acoustic effect would be over, my

Whispering Gallery would be destroyed. I again therefore crawled towards

the wall, and said as clearly and distinctly as I could:

I then awaited a reply.

Sound does not possess the property of traveling with such extreme

rapidity. Besides the density of the air at that depth from light and

motion was very far from adding to the rapidity of circulation. Several

seconds elapsed, which to my excited imagination, appeared ages; and

these words reached my eager ears, and moved my wildly beating heart:

A short delay between question and answer.

"But the guiding stream?"

"Keep your courage, Harry. We will do our best."

"One moment, my uncle," I cried; "I have no longer strength to answer

me!" Absolute silence, I felt, would be annihilation.

"Keep up your courage," said my uncle. "As you are so weak, do not

speak. We have been searching for you in all directions, both by going

upwards and downwards in the gallery. My dear boy, I had begun to give

regret I have shed. At last, supposing you to be still on the road

beside the Hansbach, we again descended, firing off guns as signals.

Now, however, that we have found you, and that our voices reach each

other, it may be a long time before we actually meet. We are conversing

by means of some extraordinary acoustic arrangement of the labyrinth.

But do not despair, my dear boy. It is something gained even to hear

While he was speaking, my brain was at work reflecting. A certain

undefined hope, vague and shapeless as yet, made my heart beat wildly.

In the first place, it was absolutely necessary for me to know one

thing. I once more, therefore, leaned my head against the wall, which I

almost touched with my lips, and again spoke.

"My boy?" was his answer after a few moments.

"That is not difficult."

"You have your chronometer at hand?" I asked.

"Well, take it into your hand. Pronounce my name, noting exactly the

second at which you speak. I will reply as soon as I hear your

"Very good; and the mean time between my question and your answer will

be the time occupied by my voice in reaching you."

"That is exactly what I mean, Uncle," was my eager reply.

"Well, make ready, I am about to pronounce your name," said the

I applied my ear close to the sides of the cavernous gallery, and as

soon as the word "Harry" reached my ear, I turned round and, placing my

lips to the wall, repeated the sound.

"Forty seconds," said my uncle. "There has elapsed forty seconds between

Now, allowing a thousand and twenty feet for every second--we have

twenty thousand four hundred feet--a league and a half and one-eighth."

These words fell on my soul like a kind of death knell.

"A league and a half," I muttered in a low and despairing voice.

"It shall be got over, my boy," cried my uncle in a cheery tone; "depend

"But do you know whether to ascend or descend?" I asked faintly enough.

"We have to descend, and I will tell you why. You have reached a vast

open space, a kind of bare crossroad, from which galleries diverge in

every direction. That in which you are now lying must necessarily bring

you to this point, for it appears that all these mighty fissures, these

fractures of the globe's interior, radiate from the vast cavern which we

at this moment occupy. Rouse yourself, then, have courage and continue

your route. Walk if you can, if not drag yourself along--slide, if

nothing else is possible. The slope must be rather rapid--and you will

find strong arms to receive you at the end of your journey. Make a

These words served to rouse some kind of courage in my sinking frame.

"Farewell for the present, good uncle, I am about to take my departure.

As soon as I start, our voices will cease to commingle. Farewell, then,

until we meet again."

"Adieu, Harry--until we say Welcome." Such were the last words which

This wonderful and surprising conversation which took place through the

vast mass of the earth's labyrinth, these words exchanged, the speakers

being about five miles apart--ended with hopeful and pleasant

expressions. I breathed one more prayer to Heaven, I sent up words of

only place where the voices of my friends could reach my ears.

This apparently astounding acoustic mystery is easily explainable by

simple natural laws; it arose from the conductibility of the rock. There

perceptible in its less mediate positions. In the interior gallery of

St. Paul's, and amid the curious caverns in Sicily, these phenomena are

observable. The most marvelous of them all is known as the Ear of

These memories of the past, of my early reading and studies, came fresh

to my thoughts. Moreover, I began to reason that if my uncle and I could

communicate at so great a distance, no serious obstacle could exist

between us. All I had to do was to follow the direction whence the sound

had reached me; and logically putting it, I must reach him if my

strength did not fail.

I accordingly rose to my feet. I soon found, however, that I could not

walk; that I must drag myself along. The slope as I expected was very

rapid; but I allowed myself to slip down.

Soon the rapidity of the descent began to assume frightful proportions;

and menaced a fearful fall. I clutched at the sides; I grasped at

projections of rocks; I threw myself backwards. All in vain. My weakness

was so great I could do nothing to save myself.

I was first launched into a dark and gloomy void. I then struck against

the projecting asperities of a vertical gallery, a perfect well. My head

bounded against a pointed rock, and I lost all knowledge of existence.

As far as I was concerned, death had claimed me for his own. 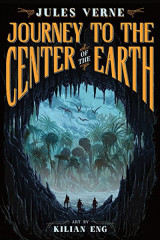