This story is fully based on Imagination, and all rights are reserved by author of this story.


INSIDE THE DOLL
PART 1


There was a man named Ravi. He was looking for a job. One day Ravi got a job as a security guard in a factory. Ravi was to take care of the factory during the day. There was another man who was taking care of the factory at night. That man who was watching at night was on leave. So the one who took care of the day had to take care of the night, He wants to work for one night, but Ravi was sick on that night. So with the permission of the manager Ravi decided to go to bed when all left the job. All the machines stopped down so all were released soon. After everyone left, Ravi locked himself inside and fell asleep. The machine turned on after midnight. The man woke up because of machines voice. After he turned off the machines he went to bed. Than the machines turned on again, this happened three times, Ravi understood that there was something there. So he ran to unlock the door but it did not open. Then someone took Ravi’s name later. He looked back there was no one. Then someone pulls it back as a ghostly figure stands in front of him as he looks ahead. The next day, when the factory workers arrived, Ravi’s dead body was found.

20 years later
A man named Johnson became the owner of that factory. He had a wife named Jasmine. He had a boy named Luis. He also had a daughter named Mary.
Johnson’s family was very good. He went to the factory every day.

One day Luis and Mary said to Johnson that they want to go for holidays. So Johnson said we are going on holiday after two days. He was thinking where they can go, and then his wife suggested that we can go to our old farm house. Johnson became happy after listening to go his farm house because he went at that farm house before 15 to 16 years. So everyone decided to go to the farm house. Back in the day, Johnson thought he will do all the work today, go shopping tomorrow and go to the farmhouse on a perfect day.

Johnson was working that night. When all the work was done, he told all workers to go at home. After finishing his work, he went to the bathroom for becoming fresh. When he came out, his file suddenly fell down. He saw one ghostly figure when he went to get the file. He ignored it. Someone took his name from behind as he was leaving. He looked back as if there was no one there as he looked ahead there was a spirit standing there. Panic before that. But also shows the cross he wore. Seeing that, the soul disappears.

It seems that what happened to him is a night mare. Then the next day those people go for shopping. There Mary sees a doll.
Mary insists on taking that doll. In the end Johnson gives him that doll.

He goes to the farm house the next day. Mary and Luis were playing. Johnson was reading a book. Jasmine was adjusting cloths after adjusting cloths she came out from the room, and then suddenly everything falls apart. She adjusts again but again it falls. This happens three times. Then finally it adjusted after all sits together.
Then night falls all fell asleep. Mary was building a house for a doll in her room. Then there was a movement was happening in that house. There was a doll on her bed, doll suddenly disappeared. Mary looks down at the bed and her brother screamed down. Doll also took the same from her brother. He was just enjoying the movement.

Then Luis exits the room of Mary’s. He was walking at floor because he not want to sleep, then he listened some sound, after that sound listened clear it seemed like someone was calling him, he followed that sound. He was following that sound then went into the store room as he had entered at store room; a knife went through his throat. Then suddenly he died.

Next day everyone was looking for Luis. There her mom came into the store room. There she saw the body of his boy. She shouted loudly and everyone came there. Seeing this immediately Johnson says to pack bags to live that house, as he gets into the car, the car blasted. So Johnson calls the person working in his factory and Johnson says that person to come there to pick up us. So the worker says I can’t because the storm is going on here. Then Johnson does whatever he wants and tells him to spend the night. Jasmine remembers that there was something in the store room. She immediately goes to the store room. There was a book. She reads it that book; in that book there was one story of a factory. There was a story of soul Jaya, she was woman got a job in a factory but she came under the machine and died. She became an evil spirit. Spirit was standing in front of her as Jasmine laid the book down. She immediately screams until Johnson and Mary arrive Jasmine was dead

Johnson told Mary to get out of the house without taking anything. But Mary went to get her doll, Johnson went to stop Mary, but when Mary went to get doll, spirit killed Mary. Mary was also dead now. Johnson ran all night and reached home. There was a Doll in front of him when he opened the door.
(To be continued) 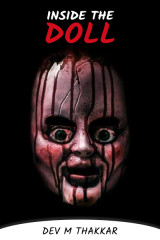