The story is fully based imagination; the story is about serial killer’s which is killing several peoples. What is reason behind that; they will get caught by police or there will be another twist for knowing this you has to read my story. One fact of this story is that, that there is the demon which name is Kara, this name is made by its author(by me) which is mixed with kali and Ravana means ka(for kali) and Ra(for Ravana) and this devil is fully based on imagination. Read it full I can bet that you will enjoy my story.
*******************

IN 2000’S
(PRESENT TIME)
Once upon a time, a police inspector was on leave from night duty because he had a plane for movie with family and he was sitting at home, He had a wife and then a girl who was about five years old.

They were living in apartment someone ringed the door bell, at night when the family was going cinema for movie, the inspector's wife opened the door. There was one man he was asking that in which flat shrivastav’s family is living? Then the inspector said in a loud voice that one of my houses was found in
This apartment, There are a lot of Flat in this apartment open to ask if you go. Then his wife said that you keep the silence. Then she tells the Man that the shrivastav’s family is next left from our house. Then the man says that if can I get some water. The Inspector’s wife says sure.

Then the inspector's wife goes to get water. The man Sits next to the inspector. Then the inspector's Wife brings water and the man drinks water. Then he takes out his knife and scratched the neck of inspector’s wife the blood started running like shower, she is killed, then he killed the inspector as same method and inspector’s daughter with same method. In those three bodies he had wrote Kara with knife. The next morning a police force arrives at the
Inspector’s house, Along With all that, there is also a Doctor, The doctor examines the three bodies and then takes them to a room for post-mortem. After few moments doctor comes with the
Report, The policeman immediately asks that how they three killed. The
Doctor says that all three was killed with knife, even he not left to a little girl and also in those three body he had wrote kara after those three were killed The police force decided to find that killer. One officer told that the Kara is demon.

At one day there was an opening ceremony of seven star hotel, hotel owner name was Sam, in that ceremony his 15 friends was only there. So they completed ceremony then all 15 friends had decided to spend their night in that hotel, all eaten there lunch, after they all had played cricket and in night they had done dinner then all were gone to sleep.

At midnight one friend named Akashi wake up and gone in bathroom for doing toilet, after doing toilet he was going to move then one man called him from backside, than Akashi moved backside then there was man who had wear one monster mask and one black jacket. Akashi scared after looking that man then that man scratched the neck of Akashi from knife. Akashi was killed then that man wrote Kara in the stomach of Akashi from knife. Then he moved to another friend room that friend name was Ravi. Ravi was sleeping, that killer was going to kill Ravi then he wake up the killer had killed Ravi. The Ravi was killed before he killed he had screamed loudly so all friends waked up. Before moving that man had wrote Kara in Ravi’s body. All friends came at Ravi’s room.

In that room there was no one there was only the dead body of Ravi. So without waiting for second the owner of that hotel had complained to police. Than one friend named pravin had noticed that in that room all friends are there instead of Akashi. So all moved at Akashi’s room but they only founded the dead body of Akashi. The police arrive there, the owner of that hotel has reported FIR, and both dead bodies had taken for post mortem. The doctor had takeout the report. The report was same as that inspector’s family. So police can easily judge that the killer is same for 5 deaths.

All police moved at police station. One officer told to another officer that have you noticed that the killer is trying to say that his nick name is Kara because in all death body he had wrote Kara. You are right, another officer replied. So it can also be that he is worshiping to the demon, current inspector told. Yes exactly it is possible, constable replied. But I think that the case will not be easy, sub inspector told. Yes it will tough, inspector replied.


After five murders Kara was there in bus, till last he stayed at bus but when last man left the bus then Kara also left the bus. Then Kara started following that man. Kara came in his clothes means mask of monster and black jacket. After Kara called that man from back that man moved back then Kara killed that man and he wrote Kara in that man’s body. All these scean was looked by one man but he was scared so he started running but he fall because of one big stone he fallen.

Next morning police arrived there and without doing post mortem they under stood that it was the work of Kara. But police found that one person is injured at one farm which was visible from that place. So police force takes that man to hospital.

In the meeting of police officer all officer decided to call undercover officer named Prakash. Prakash came there and take out all file which was of Kara. They started investigating the case; they had searched in all places where Kara had killed the victims. But they didn’t get anything. After moving at those places, the phone call came to prakash. In that call there was one person which is saying that look at news. Prakash started TV for looking news. In news the news was about ten people was killed at same time from different places but the thing is to notice that in all dead body there is written Kara. Prakash shocked after seeing the news, and called to all police officer and told that till now we are searching for one killer but the reality is that there is not one killer but there is more than ten killers’. All police officer shocked, and moved for special meeting.

In road there was one temple. That temple pujari was saying to one man that there will be huge destroy, he is back the devil is back. After listening that many riddles came in prakash mind.

There was one cave. In that cave may be 20 or more than 20 peoples were going. All those peoples had wear mask of monster and one black jacket. In that cave there was one big door. They all have opened that door. In that door there was one scary devil which named Kara. All peoples shouted Kara, Kara, and Kara. Then Kara makes them silent and told that in our community everyone wants that I come in front of peoples and make my task easy. All people told that yes we want you. Than Kara told that kill 50 people and join 100 people in our community. All told yes, Kara told we want whole world I will be the God of world. All shouted Kara, Kara, and Kara….

The police was investigating the case now they want to find all killers who are killing peoples. Also they had a doubt that, the man they get, he had looked the killer. But he was in coma. Then Prakash shouted that we get, come with me.

Next movement the killer was in front of prakash. Prakash asked that why you killing peoples. He didn’t reply. Prakash asked that how many people are there in your community. He didn’t reply. Prakash get angry and asked to say all things. Then he said that he will back, and he is there here. After he started laughing, Prakash killed him by gun. Before dying he told to Prakash that this is just beginning, after he died, there was a call from
Hospital, Hello ha Prakash, from Hospital doctor was saying in phone. Yes I am here what Happened to that man whom I bring to hospital, Prakash told. I want to say about that only, that man is out from coma and soon he will conscious, doctor replied. Yes we all are coming, Prakash told.
After they reached at hospital, that man was in conscious. That man name was Abhishek. Prakash asked to Abhishek that how are you all fine? Yes Abhishek replied. What happened that day say me
In detail, prakash asked. so I was going on my house but I looked that one man was asking something to another man, I not listen what they were
Talking but after a minute that man had killed another man, I was scared I run, but after I don’t know anything, Abhishek told. Ok Abhishek
Thanks for information, prakash replied. Than Prakash and his force gone to police station, Prakash told to all that now I can identify that the
Killer is asking to join the community but who are saying no they are killed. All told yes it can possible. After few hours one man
Came whose name was Ankit. He was detective; he said that now I will handle the case of killers I had the orders from court. All police
Officer believes him and gave him all the files of that case. Ankit started to find the killers. One man wears a mask of monster and one black jacket. He was out of one
Temple there one man came out from temple and he was going to his home. That mask man followed that man. After at one place where no one was there, in that place that mask man had killed that man by knife and wrote Kara in his body
By knife, the news of murder came
With detective, But there was no proof with detective to catch the person, the murders were happening day by day. But no one was able to catch the killers.

The two workers were looking out of that cave, they didn’t look that cave, so they decided to go inside that cave. They gone inside that cave, they looked that there was one big door. They opened that door; they both got scared because they looked a huge devil which colour was black, devil eyes was fully red, in his body there was some scratches which coloured red. A huge devil which was scary, that devil has big ears, big eyes. And In dark area devil was looking so scary because devils body was black so body can hide in dark area but his eyes and red scratches can look which make him scary. 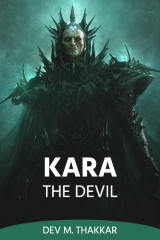