(9)
Hello everyone 😀
I hope you all are well....
Days are passed....
Charan's health get little improved physically but not mentally....
His abdomen gets affected because of the knife. So doctor advises Charan to take bed rest and avoid walking. Walking increases the pain and injuries also.
After one week....
Doctor come to regular rounds ( check the patients ).  And check charan's health also....
Doctor : now you're ready to discharge.  But don't forget my advises and don't forget to take tablets.
Charan just keep silent.  It clearly shows he was physically only present.
Varun  : sure doctor,  we will take care of him.
Doctor ( clear his throat ) : Mr.Charan....
Charan coming to the reality and now only he noticed that doctor was standing beside him.
Charan  : yes doctor....  can we leave  now ?
Doctor  : why not... but One last advice, not just a consultation, this is the warning. Don't come to this hospital and never show me your face again 😒.
Everyone there froze in shock and confusion.
J : is anything wrong,  doctor  ?
Doctor  : of course.... i really felt jealous because of you Charan. How lucky you are... everyone cares about you. They not leave you even for a minute. Real love is a rare thing  nowadays. So you don't worry,  their love quickly made you well.
Charan ( slowly  ) : You are right,  doctor.  I'm really lucky.
Doctor : In this one week.... oh God... your friend, wife, father, and this little naughty boy.... He threatens me. He told  " why did you give soo many bitter pills to my uncle  😠, two small tablets and one orange flavored tonic is enough for him "
Everyone laughs. Rohan hugs Charan.
Rohan  : You all look at me and laugh, don’t you?  But one day I will be a doctor.  I would never give bitter pills to my patients. Am i right daddy  ?
Charan  : you are always right,  kutty  😇.
Charan kissed on his forehead.
Soon they reach home. Within two days charan's dad also left. According to doctor's advice Charan take complete bed rest.  Of course he never want to be like this. But varun and rani ma never allow him to strain.  More joyful,  energetic and talkative Charan become very silent in these days. He take his food and tablets like a robot.
Janani realized her mistake and also know that it was well planned by aarohi. She have to apologize to him. But she never get chance to apologizes because always he was surrounded by people. Rohan never leave him even for a minute, he completely changed charan's room as a toy store.
With a help of physiotherapist he recovered soon.  And from today onwards he decided to go back to office and starts his routine life.
Janani try to stop him but she can't.  So she decided to leave him in his way.  She  never want to disturb him. So she decided to not to go office.
Charan thought everything was ended 😔.   But god decided to give new beginning in his life..... and That new beginning of his life was waiting in the office for him......
Searching for writer.....
************************************
Download Our App 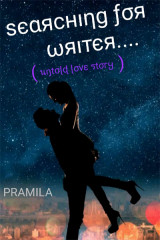