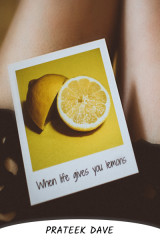 When life gives you lemons ... - Novels

When life gives you lemons ... is the story of Anshuman whose life goes through a period of turmoil in engineering due to a combination of destiny and his own volatile temper. On the verge of losing his career ...Read Morethe love of his life, he finally realizes his folly. But is it too late now? I looked at myself in the mirror and it wasn't a very pleasant sight. There was a small cut on my upper lip. My left eye was still a bit swollen. Over half a dozen bruises were visible on my face and neck.


When life gives you lemons ... - Novels