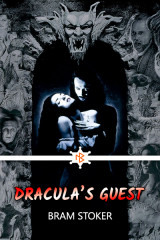 A few months before the lamented death of my husband—I might say even as the shadow of death was over him—he planned three series of short stories for publication, and the present volume is one of them. To his ...Read Morelist of stories in this book, I have added an hitherto unpublished episode from Dracula. It was originally excised owing to the length of the book, and may prove of interest to the many readers of what is considered my husband’s most remarkable work. The other stories have already been published in English and American periodicals. Had my husband lived longer, he might have seen fit to revise this work, which is mainly from the earlier years of his strenuous life. But, as fate has entrusted to me the issuing of it, I consider it fitting and proper to let it go forth practically as it was left by him.

Dracula’s Guest - 1
by Bram Stoker First published 1914 To MY SON PREFACE A few months before the lamented death of my husband—I might say even as the shadow of death was over him—he planned three series of short stories for ...Read Moreand the present volume is one of them. To his original list of stories in this book, I have added an hitherto unpublished episode from Dracula. It was originally excised owing to the length of the book, and may prove of interest to the many readers of what is considered my husband’s most remarkable work. The other stories have already
Dracula’s Guest - 2
2 The Judge’s House When the time for his examination drew near Malcolm Malcolmson made up his mind to go somewhere to read by himself. He feared the attractions of the seaside, and also he feared completely rural isolation, ...Read Moreof old he knew it charms, and so he determined to find some unpretentious little town where there would be nothing to distract him. He refrained from asking suggestions from any of his friends, for he argued that each would recommend some place of which he had knowledge, and where he had already acquaintances. As Malcolmson wished to avoid friends
Dracula’s Guest - 3
3 The Squaw Nurnberg at the time was not so much exploited as it has been since then. Irving had not been playing Faust, and the very name of the old town was hardly known to the great bulk ...Read Morethe travelling public. My wife and I being in the second week of our honeymoon, naturally wanted someone else to join our party, so that when the cheery stranger, Elias P. Hutcheson, hailing from Isthmian City, Bleeding Gulch, Maple Tree County, Neb. turned up at the station at Frankfort, and casually remarked that he was going on to see the
Dracula’s Guest - 4
4 The Secret of the Growing Gold When Margaret Delandre went to live at Brent’s Rock the whole neighbourhood awoke to the pleasure of an entirely new scandal. Scandals in connection with either the Delandre family or the Brents ...Read MoreBrent’s Rock, were not few; and if the secret history of the county had been written in full both names would have been found well represented. It is true that the status of each was so different that they might have belonged to different continents—or to different worlds for the matter of that—for hitherto their orbits had never crossed. The
Dracula’s Guest - 5
5 The Gipsy Prophecy “I really think,” said the Doctor, “that, at any rate, one of us should go and try whether or not the thing is an imposture.” “Good!” said Considine. “After dinner we will take our cigars ...Read Morestroll over to the camp.” Accordingly, when the dinner was over, and the La Tour finished, Joshua Considine and his friend, Dr Burleigh, went over to the east side of the moor, where the gipsy encampment lay. As they were leaving, Mary Considine, who had walked as far as the end of the garden where it opened into the laneway,
Dracula’s Guest - 6
6 The Coming of Abel Behenna The little Cornish port of Pencastle was bright in the early April, when the sun had seemingly come to stay after a long and bitter winter. Boldly and blackly the rock stood out ...Read Morea background of shaded blue, where the sky fading into mist met the far horizon. The sea was of true Cornish hue—sapphire, save where it became deep emerald green in the fathomless depths under the cliffs, where the seal caves opened their grim jaws. On the slopes the grass was parched and brown. The spikes of furze bushes were ashy
Dracula’s Guest - 7
7 The Burial of the Rats Leaving Paris by the Orleans road, cross the Enceinte, and, turning to the right, you find yourself in a somewhat wild and not at all savoury district. Right and left, before and behind, ...Read Moreevery side rise great heaps of dust and waste accumulated by the process of time. Paris has its night as well as its day life, and the sojourner who enters his hotel in the Rue de Rivoli or the Rue St. Honore late at night or leaves it early in the morning, can guess, in coming near Montrouge—if he has
Dracula’s Guest - 8
8 A Dream of Red Hands The first opinion given to me regarding Jacob Settle was a simple descriptive statement, “He’s a down-in-the-mouth chap”: but I found that it embodied the thoughts and ideas of all his fellow-workmen. There ...Read Morein the phrase a certain easy tolerance, an absence of positive feeling of any kind, rather than any complete opinion, which marked pretty accurately the man’s place in public esteem. Still, there was some dissimilarity between this and his appearance which unconsciously set me thinking, and by degrees, as I saw more of the place and the workmen, I came
Dracula’s Guest - 9 - Last Part
9 Crooken Sands Mr Arthur Fernlee Markam, who took what was known as the Red House above the Mains of Crooken, was a London merchant, and being essentially a cockney, thought it necessary when he went for the summer ...Read Moreto Scotland to provide an entire rig-out as a Highland chieftain, as manifested in chromolithographs and on the music-hall stage. He had once seen in the Empire the Great Prince—“The Bounder King”—bring down the house by appearing as “The MacSlogan of that Ilk,” and singing the celebrated Scotch song, “There’s naething like haggis to mak a mon dry!” and he