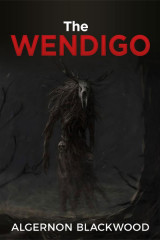 A considerable number of hunting parties were out that year without finding so much as a fresh trail; for the moose were uncommonly shy, and the various Nimrods returned to the bosoms of their respective families with the best ...Read Morethe facts of their imaginations could suggest. Dr. Cathcart, among others, came back without a trophy; but he brought instead the memory of an experience which he declares was worth all the bull moose that had ever been shot. But then Cathcart, of Aberdeen, was interested in other things besides moose—amongst them the vagaries of the human mind. This particular story, however, found no mention in his book on Collective Hallucination for the simple reason (so he confided once to a fellow colleague) that he himself played too intimate a part in it to form a competent judgment of the affair as a whole....

The Wendigo - 1
Algernon Blackwood 1910 I A considerable number of hunting parties were out that year without finding so much as a fresh trail; for the moose were uncommonly shy, and the various Nimrods returned to the bosoms of their ...Read Morefamilies with the best excuses the facts of their imaginations could suggest. Dr. Cathcart, among others, came back without a trophy; but he brought instead the memory of an experience which he declares was worth all the bull moose that had ever been shot. But then Cathcart, of Aberdeen, was interested in other things besides moose—amongst them the vagaries of
The Wendigo - 2
II In the morning the camp was astir before the sun. There had been a light fall of snow during the night and the air was sharp. Punk had done his duty betimes, for the odors of coffee and ...Read Morebacon reached every tent. All were in good spirits. "Wind's shifted!" cried Hank vigorously, watching Simpson and his guide already loading the small canoe. "It's across the lake—dead right for you fellers. And the snow'll make bully trails! If there's any moose mussing around up thar, they'll not get so much as a tail-end scent of you with the wind
The Wendigo - 3
III Thus, it seemed to him, at least. Yet it was true that the lap of the water, just beyond the tent door, still beat time with his lessening pulses when he realized that he was lying with his ...Read Moreopen and that another sound had recently introduced itself with cunning softness between the splash and murmur of the little waves. And, long before he understood what this sound was, it had stirred in him the centers of pity and alarm. He listened intently, though at first in vain, for the running blood beat all its drums too noisily in
The Wendigo - 4
IV But sleep, in the long run, proves greater than all emotions. His thoughts soon wandered again; he lay there, warm as toast, exceedingly weary; the night soothed and comforted, blunting the edges of memory and alarm. Half an ...Read Morelater he was oblivious of everything in the outer world about him. Yet sleep, in this case, was his great enemy, concealing all approaches, smothering the warning of his nerves. As, sometimes, in a nightmare events crowd upon each other's heels with a conviction of dreadfulest reality, yet some inconsistent detail accuses the whole display of incompleteness and disguise, so
The Wendigo - 5
V For a man of his years and inexperience, only a canny Scot, perhaps, grounded in common sense and established in logic, could have preserved even that measure of balance that this youth somehow or other did manage to ...Read Morethrough the whole adventure. Otherwise, two things he presently noticed, while forging pluckily ahead, must have sent him headlong back to the comparative safety of his tent, instead of only making his hands close more tightly upon the rifle stock, while his heart, trained for the Wee Kirk, sent a wordless prayer winging its way to heaven. Both tracks, he
The Wendigo - 6
VI The sudden entrance of his prosaic uncle into this world of wizardry and horror that had haunted him without interruption now for two days and two nights, had the immediate effect of giving to the affair an entirely ...Read Moreaspect. The sound of that crisp "Hulloa, my boy! And what's up now?" and the grasp of that dry and vigorous hand introduced another standard of judgment. A revulsion of feeling washed through him. He realized that he had let himself "go" rather badly. He even felt vaguely ashamed of himself. The native hard-headedness of his race reclaimed him. And
The Wendigo - 7
VII A wall of silence wrapped them in, for the snow, though not thick, was sufficient to deaden any noise, and the frost held things pretty tight besides. No sound but their voices and the soft roar of the ...Read Moremade itself heard. Only, from time to time, something soft as the flutter of a pine moth's wings went past them through the air. No one seemed anxious to go to bed. The hours slipped towards midnight. "The legend is picturesque enough," observed the doctor after one of the longer pauses, speaking to break it rather than because he had
The Wendigo - 8
VIII Then at length the darkness, having thus laboriously conceived, brought forth—a figure. It drew forward into the zone of uncertain light where fire and shadows mingled, not ten feet away; then halted, staring at them fixedly. The same ...Read Moreit started forward again with the spasmodic motion as of a thing moved by wires, and coming up closer to them, full into the glare of the fire, they perceived then that—it was a man; and apparently that this man was—Défago. Something like a skin of horror almost perceptibly drew down in that moment over every face, and three pairs
The Wendigo - 9 - Last Part
IX They talked little, and then only of the most wholesome and common things, for their minds were charged with painful thoughts that clamoured for explanation, though no one dared refer to them. Hank, being nearest to primitive conditions, ...Read Morethe first to find himself, for he was also less complex. In Dr. Cathcart "civilization" championed his forces against an attack singular enough. To this day, perhaps, he is not quite sure of certain things. Anyhow, he took longer to "find himself." Simpson, the student of divinity, it was who arranged his conclusions probably with the best, though not most