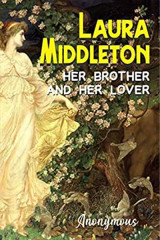 Laura Middleton Her Brother and her Lover - Novels

The remarks which Emily had made regarding the share Laura Middleton had had in opening up her ideas on the subject of the mysteries in which she had now been fully initiated had not escaped my observation. It so ...Read Morethat at that very time I was under an engagement to pay a visit to the Middletons, who were very distant relations of my mother. It of course occurred to me that it was possible I might be able to turn the information I had thus acquired to some account. Laura and I were old friends. She was about two years older than I, a very handsome, fine-looking girl but, as I had then fancied, upon rather a larger scale than quite suited my taste. We had always been on very good terms as children, but she had a sort of haughty, imperious air which, joined to the difference in our ages, had operated in a manner that would have prevented me from thinking of taking any liberties with her; and she was about the last person in the world I should have been disposed to imagine addicted to the amusements in which Emily had participated with her.


Laura Middleton Her Brother and her Lover - Novels