The War of the Worlds - 2 by H. G. Wells | Read English Best Novels and Download PDF 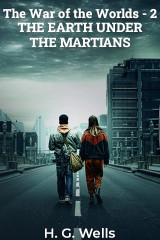 In the first book I have wandered so much from my own adventures to tell of the experiences of my brother that all through the last two chapters I and the curate have been lurking in the empty house ...Read MoreHalliford whither we fled to escape the Black Smoke. There I will resume. We stopped there all Sunday night and all the next day—the day of the panic—in a little island of daylight, cut off by the Black Smoke from the rest of the world. We could do nothing but wait in aching inactivity during those two weary days. My mind was occupied by anxiety for my wife. I figured her at Leatherhead, terrified, in danger, mourning me already as a dead man. I paced the rooms and cried aloud when I thought of how I was cut off from her, of all that might happen to her in my absence. My cousin I knew was brave enough for any emergency, but he was not the sort of man to realise danger quickly, to rise promptly. What was needed now was not bravery, but circumspection. My only consolation was to believe that the Martians were moving Londonward and away from her. Such vague anxieties keep the mind sensitive and painful. I grew very weary and irritable with the curate’s perpetual ejaculations; I tired of the sight of his selfish despair. After some ineffectual remonstrance I kept away from him, staying in a room—evidently a children’s schoolroom—containing globes, forms, and copybooks. When he followed me thither, I went to a box room at the top of the house and, in order to be alone with my aching miseries, locked myself in.