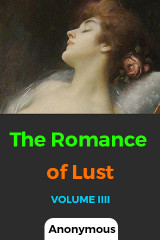 Jane—Ann—Mrs. Nichols—The Benson, the Egerton, and the Count—Ann, the Nichols, and MacCallum—Aunt, Uncle, Harry, the Frankland and the De Grandvits—Carl—The Count—The Frankland I concluded my last volume by saying that I had taken lodgings in Norfolk Street, Strand, for the ...Read Moreof being near King’s College. It was at the house of a Mrs. Nichols, tall, powerfully built, masculine, but a kind and motherly looking widow of fifty-two—an attentive and bustling landlady, looking herself to the better cooking, and having a plain cook, who was also a general servant, to help her downstairs, and two nieces to do the waiting and attendance on her lodgers upstairs. The younger was there alone when I entered the lodgings; her elder sister had had what they called a “misfortune,” and was then in the country until she could be unburthened of it. She was expected back in about six weeks. Meanwhile, as the winter was not the season, I was the only lodger, and the younger had only me to attend to; her name was Jane; she was but a little thing, but very well made, good bubbies and bottom, which I soon discovered were firm and hard, projecting fully on both sides. She was fairly good looking, but with a singular innocent manner of freedom about her that made me imagine she had as yet had no chance of a “misfortune.” In a week we became intimate, and after often praising her pretty face and figure, I snatched a kiss now and then, which at first she resented with an attractive yet innocent sort of sauciness. It was in her struggles on these occasions that I became aware of the firm and hard bosom and bottom.