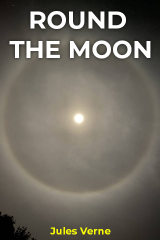 ROUND THE MOON - Novels

THE FIRST PART OF THIS WORK, AND SERVING AS A PREFACE TO THE SECOND During the year 186-, the whole world was greatly excited by a scientific experiment unprecedented in the annals of science. The members of the Gun Club, ...Read Morecircle of artillerymen formed at Baltimore after the American war, conceived the idea of putting themselves in communication with the moon!—yes, with the moon—by sending to her a projectile. Their president, Barbicane, the promoter of the enterprise, having consulted the astronomers of the Cambridge Observatory upon the subject, took all necessary means to ensure the success of this extraordinary enterprise, which had been declared practicable by the majority of competent judges. After setting on foot a public subscription, which realized nearly L1,200,000, they began the gigantic work. According to the advice forwarded from the members of the Observatory, the gun destined to launch the projectile had to be fixed in a country situated between the 0 and 28th degrees of north or south latitude, in order to aim at the moon when at the zenith; and its initiatory velocity was fixed at twelve thousand yards to the second. Launched on the 1st of December, at 10hrs. 46m. 40s. P.M., it ought to reach the moon four days after its departure, that is on the 5th of December, at midnight precisely, at the moment of her attaining her perigee, that is her nearest distance from the earth, which is exactly 86,410 leagues (French), or 238,833 miles mean distance (English).


ROUND THE MOON - Novels