A Room With A View by E. M. Forster | Read English Best Novels and Download PDF 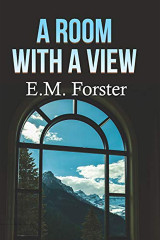 A Room With A View - Novels

“The Signora had no business to do it,” said Miss Bartlett, “no business at all. She promised us south rooms with a view close together, instead of which here are north rooms, looking into a courtyard, and a long ...Read Moreapart. Oh, Lucy!” “And a Cockney, besides!” said Lucy, who had been further saddened by the Signora’s unexpected accent. “It might be London.” She looked at the two rows of English people who were sitting at the table; at the row of white bottles of water and red bottles of wine that ran between the English people; at the portraits of the late Queen and the late Poet Laureate that hung behind the English people, heavily framed; at the notice of the English church (Rev. Cuthbert Eager, M. A. Oxon.), that was the only other decoration of the wall. “Charlotte, don’t you feel, too, that we might be in London? I can hardly believe that all kinds of other things are just outside. I suppose it is one’s being so tired.”


A Room With A View - Novels