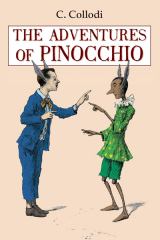 THE ADVENTURES OF PINOCCHIO - Novels

by C. Collodi [Pseudonym of Carlo Lorenzini] Translated from the Italian by Carol Della Chiesa CHAPTER 1 How it happened that Mastro Cherry, carpenter, found a piece of wood that wept and laughed like a child. Centuries ago there ...Read More“A king!” my little readers will say immediately. No, children, you are mistaken. Once upon a time there was a piece of wood. It was not an expensive piece of wood. Far from it. Just a common block of firewood, one of those thick, solid logs that are put on the fire in winter to make cold rooms cozy and


THE ADVENTURES OF PINOCCHIO - Novels