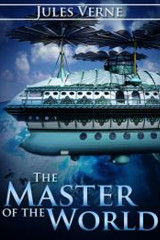 The Master of the World - Novels

If I speak of myself in this story, it is because I have been deeply involved in its startling events, events doubtless among the most extraordinary which this twentieth century will witness. Sometimes I even ask myself if all ...Read Morehas really happened, if its pictures dwell in truth in my memory, and not merely in my imagination. In my position as head inspector in the federal police department at Washington, urged on moreover by the desire, which has always been very strong in me, to investigate and understand everything which is mysterious, I naturally became much interested in these remarkable occurrences. And as I have been employed by the government in various important affairs and secret missions since I was a mere lad, it also happened very naturally that the head of my department placed in my charge this astonishing investigation, wherein I found myself wrestling with so many impenetrable mysteries. In the remarkable passages of the recital, it is important that you should believe my word. For some of the facts I can bring no other testimony than my own. If you do not wish to believe me, so be it. I can scarce believe it all myself. The strange occurrences began in the western part of our great American State of North Carolina. There, deep amid the Blueridge Mountains rises the crest called the Great Eyrie. Its huge rounded form is distinctly seen from the little town of Morganton on the Catawba River, and still more clearly as one approaches the mountains by way of the village of Pleasant Garden.


The Master of the World - Novels