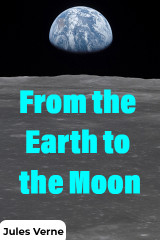 From the Earth to the Moon - Novels

Jules Gabriel Verne (February 8, 1828–March 24, 1905) was a French author who pioneered the science-fiction genre. He is best known for novels such as Journey To The Center Of The Earth (1864), Twenty Thousand Leagues Under The Sea ...Read Moreand Around the World in Eighty Days (1873). Verne wrote about space, air, and underwater travel before air travel and practical submarines were invented, and before practical means of space travel had been devised. He is the third most translated author in the world, according to Index Transla-tionum. Some of his books have been made into films. Verne, along with Hugo Gernsback and H. G. Wells, is often popularly referred to as the "Father of Science Fiction". Source: Wikipedia Chapter 1 The Gun Club During the War of the Rebellion, a new and influential club was established in the city of Baltimore in the State of Maryland. It is well known with what energy the taste for military matters became developed among that nation of ship-owners, shop-keepers, and mechanics. Simple tradesmen jumped their counters to become extemporized captains, colonels, and generals, without having ever passed the School of Instruction at West Point; nevertheless; they quickly rivaled their compeers of the old continent, and, like them, carried off victories by dint of lavish expenditure in ammunition, money, and men. But the point in which the Americans singularly distanced the Europeans was in the science of gunnery. Not, indeed, that their weapons retained a higher degree of perfection than theirs, but that they exhibited unheard-of dimensions, and consequently attained hitherto unheard-of ranges. In point of grazing, plunging, oblique, or enfilading, or point-blank firing, the English, French, and Prussians have nothing to learn; but their cannon, howitzers, and mortars are mere pocket-pistols compared with the formidable engines of the American artillery.


From the Earth to the Moon - Novels