One out of Four

The Yogis maintain oxygen in their body and prevent the dead cells in their body from stop functioning. Normally soul swappers will leave their body safe in some remote caves in the forests. Those regions in the forest where the bodies of Yogis remain cherish like anything . Sometimes animals which come there in search of food thinking that it is a dead body might eat it. There are lots of stories about Yogis who has lost their bodies like this, and still they are in search of a body to enter .Even Adi Shankara (An Indian philosopher and theologian whose works had a strong impact on the doctrine of Advaita Vedanta) to have knowledge about Kamasutra he entered the body of a king who had died and after learning the truth he came out of that body. The next day he won a debate with a lady on the subject as now he has got experience in it.

To Yogis who know about the ‘Ashtama siddhi ‘ that is the eight types of super human or super natural powers , soul swapping is a petty trick.

"What's this Baba ,why are they burning the trees like this?"

"Then only, they can make use of this tree."

" This tree's bark is used for medicine ,to peel it easily, first, they will burn the tree and then extinguish it with water for easy peeling."

"Yes , that is also going on in this forest!"

"Then what's the Forest Department doing?"

"Poor fellows...? It is their duty to protect this forest."

"But they are more worried about protecting their jobs, as many higher ups are involved in this"

While Baba was talking, the four felt some sort of stench !With sniffing noses they started searching everywhere with widened eyes. Their eyes focused on a nearby ditch which was the source of the stench. They could see pieces of the corpse of an elephant there.

It lied there with its blood frozen and lots of wild insects swarming around it.

" Oh,God! Akram, Arjun, Aji...come and look at this.. "Anthony screamed sniffing his nose around.

As they could not bear what they have seen ,they left the spot as fast as they can.

"Oh,God what a cruelty...?"Arjun expressed his concern and love for elephants very strongly!

"Hmm ,that’s good so you people love and care for animals ,I am happy to know it…"Baba said.

"What do you think of us? Are we so much hard hearted?"

Akram exploded in anger but Baba just laughed and ignored it.

"I don't know ,why you are laughing like this always?" Aji asked.

"Why I laugh is, you are not true to yourself!"

"Not true to ourselves ,what do you mean?"

"Baba, please do not talk like that ,we have never cut any trees or killed any animals here?"

"But you have made a very big mistake than that …”

"As a matter of fact I do not like cities and city people. What I know about a city is pollution ,machine like people…but here it is not like that"

"Why can’t you let us live peacefully here?"

"Baba ,still we do not understand what you are talking about..."

"You made a video, about a paranormal subject recently... right?"

"And that got telecasted too … right?"

"So what? For us it is a miracle , Baba ,we already told you that we will make you popular and famous within no time by doing all these..."

"Think , why should you use this forest to make me popular and famous ...? "

All four of them stood there totally confused!

"Baba ,we all know that you are a great Siddha but please talk in such a way that we can understand you...."

" If you can’t understand this, how you are going to understand or learn soul swapping or any other tricks from me. Many hidden secrets in this forest are now public because of people like you and the media.”

“Already the bandits are robbing the forest ,now the public, if they know about the Siddhas and their supernatural powers they will fled into this forest and will ruin its peace and purity!"

"Good? for whom...for people who come here with greed?"

"So, do you mean to say that all this should remain as a secret forever?"

"That depends on your mind set and how you view things."

“Remember any secret if it is to be maintained should remain in between belief and disbelief means people should believe it and disbelieve it!”

“The way in which people viewed this forest till yesterday and the way in which they view today has drastically changed, just imagine what will happen if the very rare herbal medicines in this forest comes to the knowledge of greedy money minded people, then that will be the end of this forest...”

The answer came from the top of the tree and the four of them looked around to see who it was. No one was there except a parrot. Did the parrot speak?

As they questioned, it flew and sat on the stretched fingers of the Mandi Siddha.

“What Mohini... what happened ?why are you here at this time? “

“They want to get the blessings of my guru to learn the soul swapping...”

“Oh, no... no.. no..”, the parrot screamed like anything with its wings twitching. Akram could not control himself at this moment and he wanted to record the entire scene at any cost, so he ran towards the guest house to take his handycam.

“Stop…there.” Baba stopped him by just showing his hand towards him!

"Where are you going?"

“I can’t permit you to record this! "

“Please, Baba,, a parrot is speaking and so many miracles are happening here...Shouldn’t I film this?”

“Yes ,I am coming to that only ,One should learn to remain satisfied with the desires of a normal human being only if you attempt to go beyond it then you have to wander like me… ”

“The parrot you saw that was speaking is Mohini, who wanted to learn soul swapping .She prayed to my guru very earnestly. One day my guru blessed her with that boon but alas what happened was her own boon has become a curse for her.”

"While she was practicing soul swapping, she went out of her body leaving her body unattended, unfortunately a tiger came and ate her body. So she got herself trapped inside the body of the parrot ! Now she is on the search for a suitable body to enter!.”

The four were listening to Baba dumbfounded!

The parrot squealed and cried.

“Don't cry ,I will save you...I’m here, right?” Baba consoled the parrot and the very next minute it flew away and vanished in to the sky…

The four couldn’t even flinch!

The Stars were shining in the dark sky as if a very big handful of glitters were sprinkled in the sky. Like a flying saucer the moon slid from one side to another…

Like a creative lighting expert who was working behind a class movie ,the sky was very busy in laying out a colourful screen up there with a light blue colour radium light and was spraying it throughout the forest. The birds remained silent as if they do not want to disturb that pleasant atmosphere. Some naughty insects who wanted to stage their amateur talent were playing their music like a harmonium … hmm ...hmm…hmm…

Some cats were busily jumping from one tree to the other in search of prey with their eyes shining like beacon lights.

The fog was too much for that time of the hour but it looked gorgeous.

In the midst of that, there was a murmur coming out of the bushes. Two men were moving very slowly in between the bushes with their spears ,fully covering themselves with black blankets. They moved with caution watching their surroundings. They were Kittan and Kunju. One of them had a sack on shoulder with a black monkey trapped inside which kept jumping now and then.

The monkey was trying to escape by biting off the sack with its teeth, Kunju stopped it from doing so by beating it with the shaft of the spear. It travelled with them with fear not knowing its fate!

As the two were accustomed to these type of walks in the forest , they moved along the rough forest paths with ease.

Suddenly a mountain snake fell on Kunju from the top of a tree but he did not panic or got frightened. After a little struggle, Just as if he was fighting with a boxer he just pushed it and threw it away.

Now they also heard the bleat of the lamb…

They both looked at each other and smiled meaningfully!

"Yes, Kitta ,I believe it got caught... a perfect catch." He wrapped the tip of the spear with a piece of cloth soaked in oil and lighted it with a match stick.

It caught fire !The surrounding forest and wild plants were dazzling in that light. On their way they saw a very rare climber plant called ‘Chandra Kodi’. When the light of the flame was on it, it immediately hid itself into the soil like a thief who has seen by the police. Kittan without wasting time jumped and tried to catch it but he could get only the tip of the plant!

“A doctor in Thiruvananthapuram promised ten thousand rupees for this plant. But what to do it always runs away from me and hide!" Kittan looked at the herbal plant with disappointment and smiled.

They went with the torch and looked under a big tree from where the voice of the lamb came. The sturdy bamboo cage they made that morning was lying there, inside it was a tiger holding the lamb's throat and drinking the blood as if it was drinking some chicken soup!

The tiger looked at the torch and the men approaching and tried to escape dropping the lamb. But the doors of the bamboo cage blocked its way.

"Our minister is very lucky... now one out of four is ready! " said Kittan. 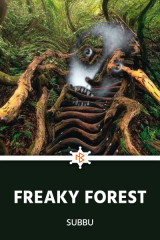