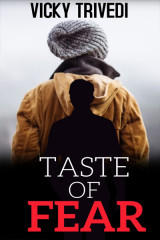 TASTE OF FEAR A THRILLER BY VICKY TRIVEDI ...Read More Copyright © Vicky (Vinod) Trivedi This is a work of fiction. All characters, locations, and events are fictitious. Any resemblance to actual events or locales or persons, living or dead, is entirely coincidental. All rights reserved. No part of this publication may be reproduced, stored in or introduced into a retrieval system, or transmitted, in any form, or by any means (electronic, mechanical,