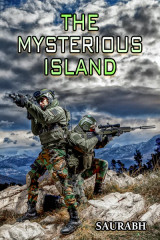 Dear readers this is my first work. Hope you read it and send me feedback in the comment box.CH.1"Preparation time"The news is every where that there is an island near Andaman and nicobar archipelago, its viper island.This island has ...Read Morehidden treasure somewhere in it.Pirates and underworld mafias wanna get the possession of that treasure so everybody starts their preparation to get their as soon as possible.Here in India, there is a group of four young boys who are in army and from some resource they receive the information about the treasure and hence all four of them decide to